The 2015/2016 season is coming to an end with Aston Villa already regulated with a total of only 17 points cumulatively.

Also, the Premier League relegation odds 2016 got interesting after Newcastle were beaten by the Canaries 3-2, giving them hope of survival.

The game between these two teams struggling to avoid relegation was settled in injury time when Martin Olsson’s goal saw Norwich take a huge step towards safety.

At Premier League relegation odds of 13/8 to be relegated, Norwich is only four points away from the drop zone, though their immediate competitors, Sunderland FC and Newcastle FC all have a game in hand.

Sunderland on the other hand only managed to secure a 0-0 draw at home against West Bromwich and consequently saw their Premier League relegation odds stay up to cut down to 2/7.

Sunderland were 5/2 while those of Newcastle were 6/1. Out of the mentioned teams, Aston Villa, who have already been relegated, have only managed to secure three wins at Norwich, Bournemouth and Crystal Palace.

They have also conceded a total of 76 goals and only managed to score 27 goals. In simple words, they have been pants the whole season!

Which Was Teams Axed off the English Premier League in the 2014/2015 Season?

QPR, Burnley, and Hull City were the three teams that were dropped off the Premier League at the end of the 2014/2015 season.

Unlike Aston Villa, QPR, who finished at the bottom of the table, managed to secure 30 points and eight victories. Burnley followed closely with 33 points and Hull City.

They were only three points behind the relegated Aston Villa and the notorious Sunderland FC and had a better goal difference that either of the sides. 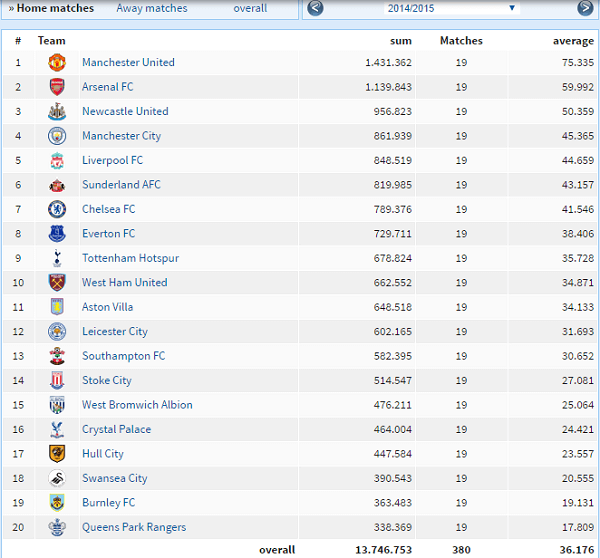 With the season coming to an end, all attention is now turned to the 2015/2016 relegation battle between the three sides; Newcastle United, Norwich City, and Sunderland.

It will be amazing if this battle can continue to the final day of the competition just like it has always been in the past where teams in the EPL have had to play the final matches to determine who stays up and who wins the English Premier League title.

The newly promoted sides have always featured heavily in the battle for survival, but in the past few seasons, they have always been fairing on so well.

In the 2012/2013 season, West Ham and Southampton survived the axe with ease, and the season before that, all the three teams, for the first time in ten years survived the axe.

The 2013/2014 season however only saw Crystal Palace and Hull City survive with Tony Pulis and Steve Bruce doing exemplary jobs on a limited budget.

However, in the 2014/2015 season, only Leicester survived the axe with QPR and Burnley going straight back to the championship.

With Watford and Bournemouth having acquired the magic number of points required to breathe a sigh of relief in the EPL, Norwich seemed to be doomed, and their win over Newcastle FC only gave them a slight chance of survival.

However, they have been playing extremely well, and only luck may not have been on their side.

Watford and Bournemouth have been struggling with wins, especially the Hornets. With the coming season, only time will tell us if both the teams will get to grips with the EPL, though I have my server doubts.

Premier League Relegation Odds Checker is an online betting website, which compares betting odds and gives you direct access to some of the best-priced odds from different online bookies. 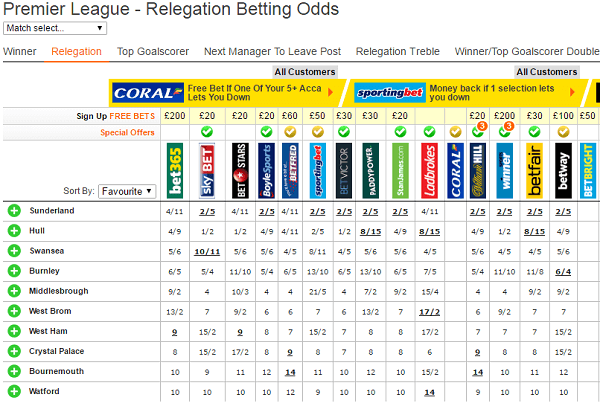 Mostly, the Premier League Relegation Odds Checker has become the number one choice for both casual, novice and professional gamblers since the first time that the website went live in the year 1999.

How Do the Premier League Relegation Odds Checker Work?

The Premier League Relegation Odds Checker has a new look that is divided into the key betting fields. On the key fields, you will be required to pick a market to use, or you can use the left navigation menu to view other markets besides the relegation odds.

Once you pick the market, you click on the odds, and you will be redirected to the bookmaker. To get the best premier league relegation odds 2016, you should create an account with the website and click on the relegation tab.

It will have all the relegation odds of the premier league teams as well as the bookmakers with the best odds.

How Much Do the Odds Checker Services Cost?

The odds checker services are free. They have no charges for the services they offer you, especially when giving you the odds of various premier league teams.

However, you can choose to receive exclusive offers from the website. The offers will include you in their newsletter services, enter you into competitions as well as customizing your experience at their site.