The 2015/2016 EPL was a big surprise to everyone, but as we head into the 2016/2017 season, everyone is wondering if Leicester City will repeat their heroic feat.

The league has also seen additional coaches such as Pep Guardiola, Antonio Conte, Jurgen Klopp and the “special one.”

Some are even asking if this is going to be the year that Spurs will overtake Arsenal and claim the London Glory.

Current champions, Leicester City, are predicted to win the title at odds of 28/1, further behind are Liverpool FC at odds of 8/1, Arsenal at odds of 11/2 and Tottenham Hotspurs at odds of 9/1.

From the analysis conducted, Manchester City is set to win the title given the recruitment of their new coach Pep Guardiola.

Others may argue that Manchester United are the favorites to win the title given Jose Mourinho's experience and record of winning titles in his first season with the team.

At odds of 8/1, some may say that Liverpool will astonish people having made very important signings which will boost the team. Further, they only have the EPL to focus on and have the right coach and team to achieve this.

Another popular market offered at SkyBet is the top 4 finish spot, which mainly features teams that will finish in the top four.

Usually, there are the “top four” teams that are “automatically” guaranteed to have a spot in the top four and consequently have very low odds at some of the betting sites.

Manchester City, Manchester United, Arsenal, Chelsea, Leicester, Tottenham Hotspurs all have been tipped as favorites to win. Defending champions Leicester have odds of 5/1 to finish within the top four.

Of the mentioned teams, Arsenal has an unbeaten record of finishing in the top 4, having maintained 16 successive top 4 finishes.

Manchester City has also had a good run of finishing in the top 4 since ownership was transferred to the wealthy tycoons.

Chelsea has been shaky in finishing at the top, having slipped to mid-table in the 2015/2016 season but are predicted to bounce back to their winning ways to secure a top 4 finish.

With Manchester United players playing under the “special one,” they are also favorites for the top 4 finish.

Liverpool, Spurs, Leicester and West Ham are bound to battle for the fourth spot, with Spurs being the favorites of the four teams to secure this coveted spot.

Latest Premier League Betting Odds to Finish Outside the Top 4

The teams that are featured in this section include the “big four” as well as the “Europa” teams such as Southampton, Everton, West Ham, Liverpool, Leicester and Tottenham Spurs.

Another popular market among the UK punters, the premier league relegation, will feature some of the teams that have recently been promoted. 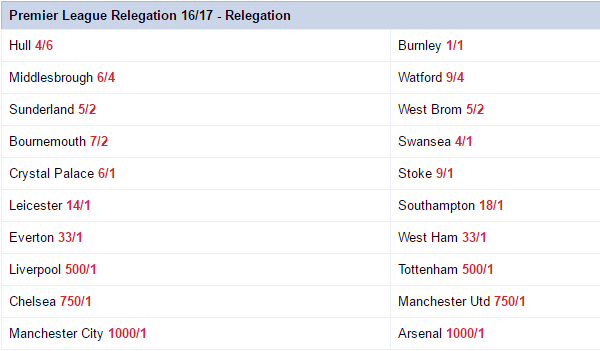 Having survived last season’s axe, Sunderland FC, who are under a new coach are set to fight for their survival this season again.

However, Watford, West Brom, Bournemouth, and Swansea are set to be favorites for the relegation spot having struggled so much to survive in the top tier.

The latest premier league betting odds for the top scorer are as shown below. Unlike the previous years where Sergio Aguero and Harry Kane have always been the favorites, we now have plenty of contenders for the golden boot. 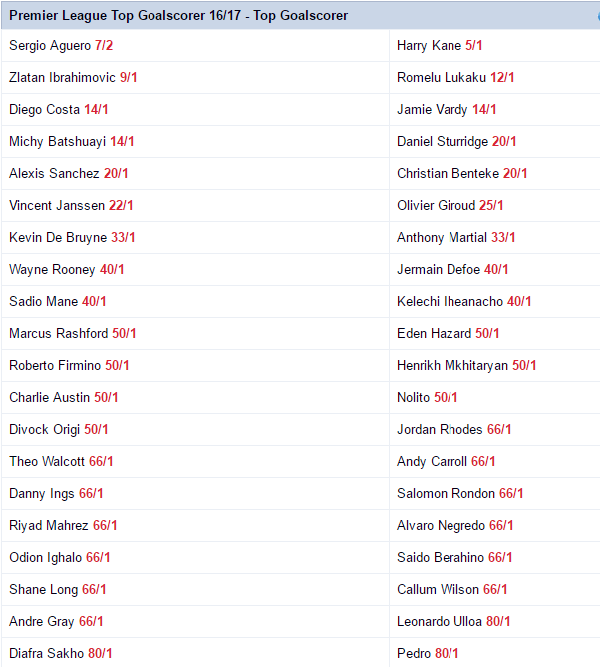 Just recently, Manchester United signed up Zlatan Ibrahimović, who was PSG’s and France’s Ligue 1 top scorer as their main striker.

Him, together with other players such as Jamie Vardy, Oliver Giroud, Anthony Martial, and Alvaro Negredo are some of the players we think will battle out for the much-coveted golden boots.

Out of the various special options, I would like to note mention the Premier League highest finishing London club.

Given their recent form and gameplay, Arsenal seems to be the favorites to finish above all the other clubs in London.

They’ve always finished above Spurs, West Ham and Crystal Palace in the recent years. Chelsea has always challenged them, but this time, things are set to be different with pundits tipping Arsenal to win the title.