Football or conventional soccer as it is referred to is one of the most popular games in the United Kingdom, Europe and many other parts of the world.

Even in the USA, where American Soccer is more popular, thousands of Americans are showing a keen interest in the conventional soccer, which is played across the world.

As far as the United Kingdom is concerned, there is no doubt that The English Premier League is the most popular and prestigious football tournament.

It involves the tops English football team. Hence it is not surprising when we come across millions who are into what is known as Premiership betting.

The Importance of Odds and Bets

It would be pertinent to mention here that whenever one talk about The Premier League obviously, there is betting and punting.

Betting is done on a prediction about the outcome of some matches and this where odds have a big role to play.

Hence, it is important for punters, gamblers, bettors, and bookmakers to have a decent idea about the various Premiership betting odds and that is what we will be learning in the next few lines.

There is no denying the fact that odds betting is a highly complicated and complex task. Instead of punters trying their hands at punting, it would be advisable to take the help of the odds, which are published by various reputed online bookmakers.

Based on the results of such bookmakers, let us try and look at the odds for some matches as far as the English Premier League is concerned.

The Premier Table Is Important

Though there are many, who believe that quite a few things must be considered as far as English Premiership betting is concerned.

However, at the end of the day, there is no doubt that performance matters and this is best reflected by the latest points tally in the Premiership League table.

As of now, the table is topped by Chelsea who has 52 points from 21 matches with 17 wins, 1 draw and 3 losses. They are followed by Tottenham and Arsenal with 45 and 44 matches respectively from 21 matches.

There are other teams too, and therefore all these have to be taken into account while registered odds as far as The English Premier League is concerned.

It would be interesting to look at the outright betting odds is concerned. As of now, there is a perfect synchronization between the points table and odds as far as Chelsea are concerned.

They continue to be favorites with an odd of 4/5 is their favor. The next in the line is Liverpool with 6/1 odds, and this is a bit surprising because they are fourth in the list and are behind Tottenham and Arsenal. 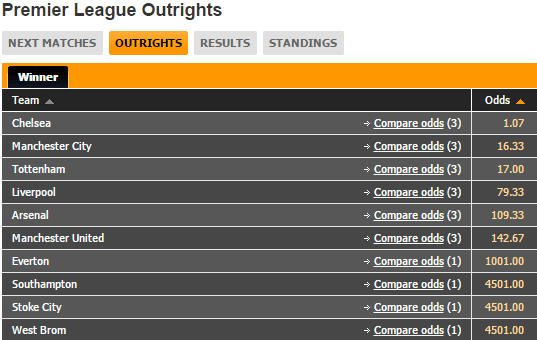 However, the odds could be because they have not played 21 matches as is the case with the top three teams.

Further, on their given day, it is quite possible that Liverpool could beat even the best of teams including Chelsea. So, the best thing would be to wait and watch as far as the remaining matches of Liverpool are concerned.

Which Team Will Avoid Relegation?

It also needs to be kept in mind that along with top honors, there also is something which happens at the bottom of the table.

Each year some teams have to face relegation and move down to the next lower grade of the English League. In the same way, some teams will be promoted from the lower leagues and become a part of the English Premier League.

A Look at Possible Scenarios

As far as the odds for prevention of relegation is concerned, Watford has an odd of 1/18 which means that they stand a reasonably low chance of getting relegated if one goes by bookmakers and punters. 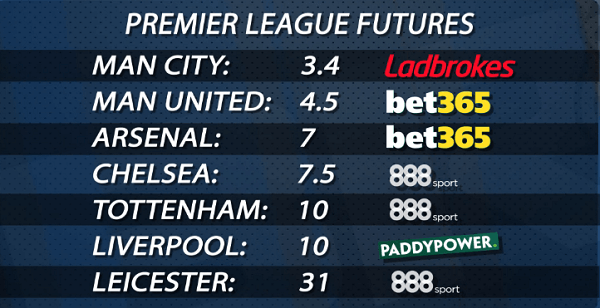 This is although they are 14th in the table out of twenty. The most likely team for relegation as per the bookmakers is Sunderland who is second last in the table with just four points out of 21 matches.

Swansea with an odd of 6/4 also is at a high risk of being relegated not only as per the points table but also as per the odds which they have from bookmakers and punters.

PFA Player of the Year

Though there is no doubt that football is a team game, there are some dazzling and brilliant individuals who make a big difference to the teams on their own.

Hence, when it comes to English Premiership betting odds lot of attention is placed on the importance of individual players.

Eden Hazard is the favorite of odds, and he has the best odds as of now. The odds are a stunning 3/1 in his favor, and this certainly is great new.

The fact that he has an odd of 6/1 certainly puts him in a top spot as far as the PFA player of the year is concerned.

He has fourteen goals to his credit, and this is better than his total number of goals of twelve as far as 2015-16 is concerned.

Hence, it would be not surprising if the odds match perfectly with what the purists have to say about this great player.

There are many factors, that must be considered as far as the English Premiership League is concerned.