Premier League: Odds on the Winner

When it comes to sports, there is no doubt that football or soccer as it is called is one of the most popular sports in the world. It is played across hundreds of countries in the world and is followed by millions.

While many keep in touch with the game, because they enjoy it, there are others who are keen on making some money out of it.

They would like to place bets on their favorite teams and players and in the process win some small, medium or big jackpots.

However, predicting the winner of favorite teams is easier said than done and there are quite a few things that need to be considered.

In this article, we will try and have a look at the extremely popular Premier League and try to predict the winner based on the odds which bookmakers are ready to offer for the various teams.

This certainly will help punters to have a variety of information based on which they can place their bets.

What Does the Table Show?

As per the latest points tally, Chelsea is ahead of the rest of the pack. They have played 29 games, won 22 of them, have drawn 3 and have lost four.

They are there at the top with a point tally of 69 which is seven points ahead of the second in the table Tottenham.

There are other contenders too such as Manchester City, Manchester United, and Liverpool who also have the capability of creating some upsets and can move up the table.

With quite a few numbers of matches being available now the field is still open. Hence, it may not be possible right now to predict the outcome of this year’s winner.

However, those who are into betting on EPL need to do some proper research before they can come out with a reasonably accurate prediction of the Premier League odds winner.

Premier League: Odds on the Winner

There are different odds coming out from different bookmakers. Therefore, it would be difficult to find out as to which is the best odd and how does it differentiate one team from the other.

This is because each bookmaker takes his inputs from different sources and then comes up with an odd combination of their own. Let us try and see how the odds stack up against various teams.

There is no denying the fact that Ladbrokes is one of the most reputed and well-known bookmakers in the country today. They are present both in the casino gaming business and also in sports betting business.

They are extremely aggressive, and punter focused when it comes to football betting. Hence, the odds which they have to offer certainly come with quite a bit of respect and admiration. 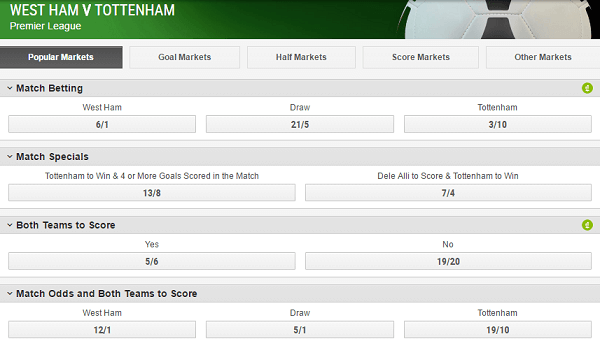 Let us what they have to offer as far as the current English Premier League is concerned. According to them, Chelsea continues to be the big favorite, and this is borne out by the fact that they have an odd of 1/12 in their favor.

This is indeed a great place to be in and therefore if punters want to make big money on EPL betting they will have to stake big money in favor of Chelsea.

The next team on the line is Tottenham with an odd of 10/1 which is also quite decent. With a number of matches still to be played, there are good chances that Tottenham could claw up the ladder and pose a serious challenge to Chelsea.

The third team on the list is Manchester City, and Ladbrokes is ready to offer them an odd of 25/1 which is not very positive given the fact that this is a good team with some of the best players.

However, they do have some time to catch up and with almost around nine or eight matches still left to play.

But with the form in which Chelsea is in and given the fact that Chelsea has completed playing almost against all the strong opponents, Manchester City have their task cut out.

Apart from the above, there are some other teams which also figure in the list, and they include teams such as Liverpool, Manchester United and Arsenal.

It would be worth looking the odds position of the English Premier League this season as far as Paddy Power is concerned.

Chelsea here to continues to be on top of the list with an odd of 1/8 in their favor which is excellent and even better than what Ladbrokes is ready to offer.

This means, for every eight sterling pounds you bet on Chelsea, you will get paid only one sterling pound. Hence, they are the hot favorites to win EPL this year. As of now, no one seems to be anywhere near to them.

The next in the line is Tottenham with an odd of 15/2 in their favor. In other words, for every 2-pound sterling staked on this team, you could win 15-pound sterling.

Hence, if you can take a calculated risk you could win big money should Tottenham win the EPS this year. However, it looks quite high as of now.

Hence, the best way forward would be to make a mix bet. You could choose some high betting in favor of Chelsea and choose a low stake betting in favor of teams like Tottenham, Man City, Man United so that you are able to have a good bag of staking which could help you to make decent money.

While the above pertain to only two major bookmakers, Ladbrokes and Paddy Power there are others like Betfair, Coral, Bet365 and others too.

You must take inputs of odds from these players too and then take a call as to which is the best possible option.

It calls for researching on other parameters too including the form of the players, the performance of teams in certain playing conditions, grounds and their home and away performances.